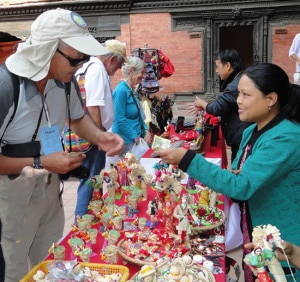 KATHMANDU, Nepal– Per day spending of tourists who made their way to Nepal during the period of mid-January 2013 to mid-January 2014 has sunk sharply. Tourists spent $34.49 per day on an average, which is a fall by 1.25 per cent compared to the corresponding period of last year.

According to the data of the Ministry of Culture, Tourism and Civil Aviation (MoCTCA), tourists’ spending culture have been in a declining trend since a decade. In 2003, the spending of foreign visitors had reached a record $79.1 per day.

Though the government and travel/tourism entrepreneurs launched various promotional activities, arrival of tourists and their spending habit failed to boost.

The fall in per tourist expenses is attributed to the lack of capacity of tourism service providers to increase tourist spending mainly outside Kathmandu and Pokhara.

Normally, it is only within the valley and some other tourism destinations that attract considerable tourist expenditure. Between the period of mid-January 2013 to mid-January 2014, nearly o.8 millions foreign tourists made their way to Nepal against 803,092 who entered the country in the same period the previous year.

Likewise, the average length of stay of tourists has dropped to 12.57 days from 12.87 days.

Despite fall in number of tourists and their low spending in Nepal, the tourism industry provided direct employment to 178,000 individuals, according to the survey. The number of people employed in the sector was 160,000 in the previous year.