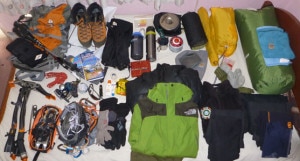 KATHMANDU, Nepal–Hotels and lodge that used to be packed with mountaineers and their guides near the Everest base camp are now full with the mountaineers´ supplies. Hotels in Gorapsep and Labuche are now playing host to the tons of supplies of the mountaineering expedition teams that cancelled their bid to scale the world´s tallest mountain after April 18 ever dreadful avalanche, according to newspapers report.

As it would be costly to take down the supplies intended for a month-long stay at the base camp, the mountaineering teams had bought in hotels nearby to reuse it.
However, it was very difficult to find sufficient space for the logistical goods of the 31 mountaineering expedition teams, according to mountaineering guide Nima Jangbu Sherpa. As the incident took place just at the beginning of the expedition, not much of the supplies were consumed.