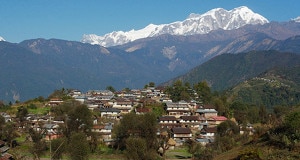 KATHMANDU, Nepal–Ghalegaun, a rural village in Lamjung district of western Nepal has turned the most popular tourist destinations in the recent years.

Anyone can get the breathtaking view of majestic Himalayas including Machhapuchhare (6693m),  Annapurna(8091m), Annapurna II,  Annapurna IV ,  Bouddha Himal , Himalchuli  among many more smaller peaks from the village.

According to Ghalegaun Rural Tourism Committee, around one hundred tourists in average from the nation and abroad visit the village situated 205km north- west of the Capital Kathmandu.

The rural village is well known for mountain sightseeing, sunrise and sunset view, and demonstrations of traditional ethnic Gurung culture.

As many as 35 houses in the village are providing home-stay services for tourists in the village which can be reached in two-hour drive from the district headquarters Beshi Sahar.

In a bid to lure more tourists, the village has decided to add three parks and a view tower, this week, according to Prem Ghal, Chairman of the Ghalegaun Rural Tourism Committee. The construction would begin on April 7 on the occasion of a cultural festival of Ghale people.

Ghalegaun is supposed to be the Capital city of the Ghale kingdom before the sixteenth century and the place of origin of Ghale community.