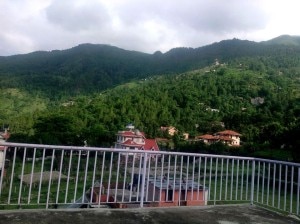 KATHMANDU, Nepal- Shivapuri hill that homes Shivapuri National Park in the capital Kathmandu shines with the monsoon rains on the morning of Monday, July 1, 2013. Shivapuri is the second highest peak among the hills surrounding the Kathmandu Valley.

It is 2732m at its peak with numerous sharp ridges radiating to all sides. The park is a water shade for the capital valley contributing a remarkable volume to quench the thirsts of the Kathmandu city dwellers.   Also different plants, animals, birds, mammals, butterflies among others are found in the park.