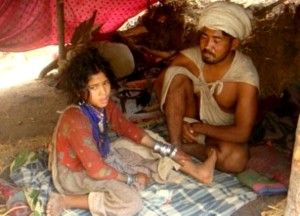 KATHMANDU, Nepal-  Ratna Prakash Shahi, 33,  sits with his second wife Lauki Shahi. Lauki, 13, is the second wife of Ratna Prakash whom he had married recently after few months’ love affairs. Ratna Prakash is the member of the Raute community that is the only nomadic community found in Nepal counting some hundred. The community that never cultivates live up their life by carving wood vessels and selling those in the villages nearby. Its only after the April movement in the country that declared the nation to a democratic republic the community members (specially men) preferred to come to the cities otherwise they always remained in the jungle being totally detached from the remaining world. Photo: TRN