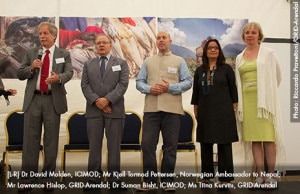 According to the ICIMOD office that released the press statement from Kathmandu on Monday, the event was hosted by GRID-Arendal, Center for International Climate and Environmental Research-Oslo (CICERO), and the International Centre for Integrated Mountain Development (ICIMOD).

“The event served as a platform for dialogue between Himalayan Climate Change Adaptation Programme (HICAP) promoters and policy makers working on food security and gender issues in the mountainous region,” read the ICIMOD statement.

The knowledge shared with diverse Norwegian audience representative of politics, industry, and the general public has been taken as an opportunity to see examples of Norwegian engagement in critical issues in a largely developing part of Asia, the ICIMOD stated.