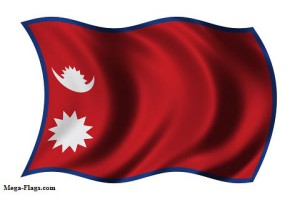 KATHMANDU, Nepal–With an aim to send the message of national unity devoid of discrimination of any kind, thousands of people are planning to assemble at open theater in Kathmandu on coming Saturday.

The attempt is also targeted to break the Guinness World Records for the largest human flag. As many as 21,000 participants from 23 schools and 27 colleges in the Capital Kathmandu have already registered for the event to be organized by Human Values for Peace and Prosperity.

As per the plan, each participant will have placards with three colour schemes––red, white and blue––of Nepali national flag, and they will position themselves in a double triangle formation, resembling the flag’s shape.

The placards have been designed by the students from Pulchowk Engineering Campus and Kathmandu Engineering College.

According to Bhawesh Khanal, president of Human Values for Peace and Prosperity, the collected amount will be donated to the landslide victims in Sindhupalchok district.

“We have decided to cut the expenses of inviting the representatives of Guinness World Records and give away the money to the landslide victims instead “, Khanal was quoted by today’s broadsheet dailies.