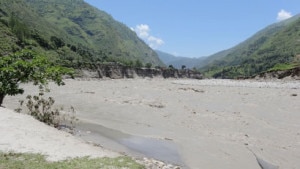 KATHMANDU, Nepal–Incessant rainfall for the past couple of days have wreaked havoc in Kanchanpur, Baitadi, Dadeldhura and Kailali among other districts situated in the far western region of Nepal.

Two people were swept away and around 300 families were displaced while dozens of houses were flooded away sweeping 200 ropanis of farmland.

According to police, Tulasi Panta of Bhimdatta Municipality-11was swept away by the Mahakali river on Saturday as she was collecting fodder while Bir Bahadur Raut of Ramshikharjhala VDC-2 in Kailali breathed his last after being swept by a local river. Police said that Raut was crossing the river when the incident took place.

As many as 300 families were reportedly displaced when the Mahakali River advanced towards riverside settlements. The district headquarters in Mahendranagar and surrounding areas have also been inundated.