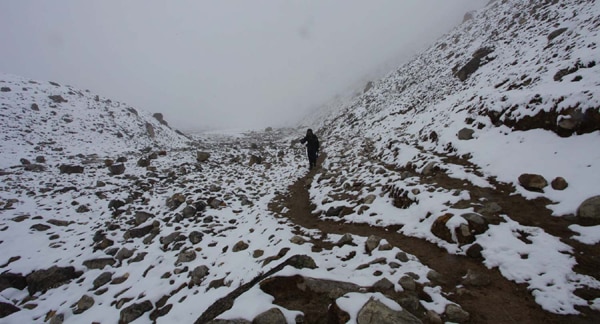 KATHMANDU, Nepal– Image taken on May 26, 2014 shows a tourist walks along the path ahead to Everest Base camp during snowfall at Gorakhshep in Khumbu region, Solukhumbu, Nepal, May 26, 2014. Gorakhshep is near to Kalapathhar and Everest Base camp and also popular for the trek to Qomolangma. More than 2,000 foreign mountaineers flock to the Himalayan nation sandwiched between India and China annually, mainly to climb the world’s highest peak. However, mountaineering activities in the Everest region have been dropped down sharply following deadliest ever avalanche on 18 April. Image courtesy to  Xinhua.