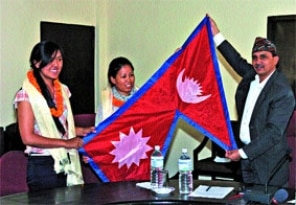 KATHMANDU, Nepal– Nepali women climbers are all set to climb Mt. K2, congrats for their bold expedition which aims to draw global attention on climate change issues and its impacts on the earth. Maya Sherpa of Okhaldhunga, Pasang Lhamu Sherpa of Solukhumbu and Dawa Yangzum Sherpa of Dolakha are set to climb Mt K2, the deadliest peak to scale on the earth after Kangchenjunga. Dr. Krishna Chandra Paudl, secretary at the Ministry of Science, Technology and Environment (MoSTE), Thursday extended best wishes to the women climbers’ team who are in final preparation to scale Mt. K2. During a special function in the capital secretary Paudel expressed confidence that the team’s success on K2 will make the country proud and convey the message of urgency to the world leaders to reduce the negative effects of climate change on the earth. On the occasion, he handed over the national flag to Maya and Pasang Lhamu. However another team member Dawa was absent in the function as she is attempting to climb Mt Cho Oyu on the Tibetan side. Located between China and Pakistan at the elevation of 8,611 meter, Mt K2, the second highest peak in the earth, is often called ‘Killer Mountain’ for its record of one death out of every four climbers. Team leader Maya has 11 years of experience in mountaineering and has already scaled Mt Everest twice. Nepal Mountaineering Association Trekking Agencies’ Association of Nepal including other tourism-related organizations are sponsoring the expedition which is estimated to cost Rs 8 million.