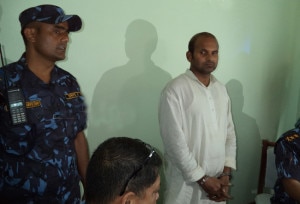 KATHMANDU, Nepal–Police have held sitting Constituent Assembly member Sanjaya Kumar Shah “Taklu” for his mastermind behind the heinous twin blast in Janakpur in 2012. Shah had deliberately directed to detonate the bomb that killed five people who were on sit-in raising their genuine demands on 32 April of that year, according to police.
Shah was held from Birgunj, a business town of Nepal located in the mid-western province on Saturday night. Dhanusha District Police made Sah public through a press meet at 11 a.m. Sunday.
“Shah has been under arrest and he will be taken to district court for legal prosecution,” Debendra Thakur, a police officer told amidst a press conference. The court hearing will decide as to how long Shah will be remanded to judicial custody for further investigation into the case.
Shah was elected a CA member from Dhanusha-4. He still holds the position of Sadbhawana party’s senior vice- president. Shah was arrested following a tip of Mukesh Chaudhary and Om Prakash Yadav – two of Sah’s aides who had been held for the blast two years ago.
In the meantime, the parliament secretariat has suspended the CA membership of Shah following the filing of a file against him at the Dhanusha District Court.