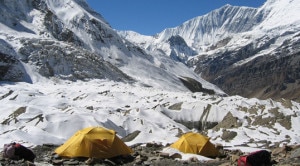 KATHMANDU, Nepal–A French national was found dead at Dhaulagiri base camp at Mudi VDC along the Round Dhaulagiri trekking route.

French national, Nacht Oliver, 55, was found dead at the Dhaulagiri base camp, national news agency RSS quoted Janardan GC, Deputy Superintendent of Police at Myagdi District Police Office. The cause of his death is yet to ascertain.

The body of Oliver has been airlifted to Kathmandu on Thursday with the initiations of local, the report further added.

The proprietor of the trekking agency concerned had informed police of Oliver’s death. The Dhaulagiri base camp is three days’ trek from the nearest police post.