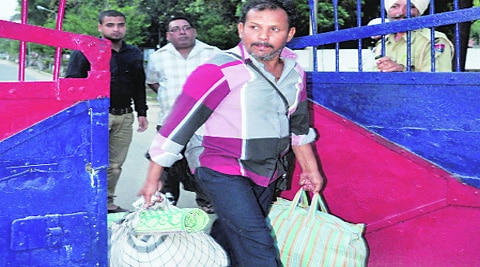 KATHMANDU, Nepal–Bhupal Man Damai alias Yusuf Nepali, who was jailed in connection with the hijacking of Indian airlines flight IC-814 to Kandahar in December 1999,after being released in Patiala on Saturday. Damai (54) was released from Patiala Central jail at round 6.30 pm Saturday, with a stamp on his wrist, which entitles him to free train journey till Gorakhpur enroute to his native place in Nepal.

He was charged for providing logistical support to the main culprit. Soon after his release, Nepali told reporters that he was not involved in the hijacking.

Among the 10 accused pronounced by the CBI for executing the hijacking, seven were Pakistani while two were Indian. Photo: Indian express