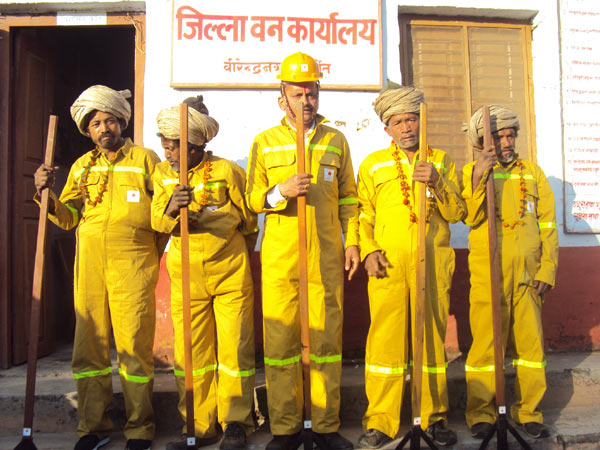 KATHMANDU, Nepal– Rautes, who have been living in forest for centuries are now changing their behaviour. They had been living in forests and eating forest victuals. However, breaking the centuries’ old traditions, a few members of the community are getting drawn towards modern life style. In this picture, members of Raute community Ain Bahadur Shahi, Surya Narayan Shahi, Dil Bahadur Shahi and Bir Bahadur Shahi pose for photo after taking the charge of forest guards in District Forest Office (DFO) Surkhet. They were appointed as forest guards for the next five months and each of them will receive a monthly salary of Rs 2,500. They have agreed to help douse wildfire (if any) and initiate campaign against deforestation in the district located in the mid-western region of Nepal. Rautes who used to eat wild roots and meat of monkey have now slowly attracted to having rice, goat meat and alcohol. The government of Nepal is providing them an allowance of NRs. 1,000 per month per person. Photo: ekantipur