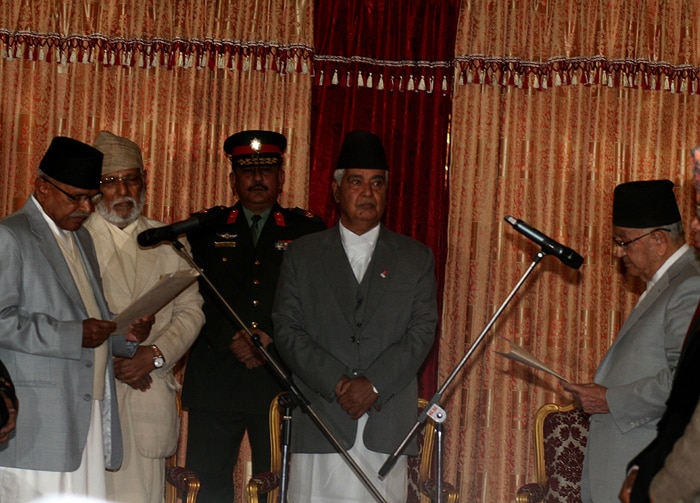 KATHMANDU, Nepal – President Dr. Ram Baran Yadav (l) administrating the oath of office and secrecy to Rastriya Prajatantra Party (RPP) leader Surya Bahdur Thapa as the Acting Chairman of the CA at the President Office on Monday, January 20, 2014. Thapa, 86, took the oath for the post by virtue of being the senior-most Constituent Assembly member. As per the existing rule of CA, Thapa will remain Acting Chairman until the CA elects chairperson and vice-chairperson. With Thapa sworn-in, the CA procedure has formally begun. Thapa will now administer the oath of office and secrecy to the 574 CA members at 11:30 am at the International Convention Centre on Tuesday. The first CA meeting will begin at 3 pm on January 22 with Acting Chairman Thapa delivering a speech. This will be followed by an address by Chairman of Council of Ministers Khil Raj Regmi. Also seen in the photo are Vice-President Parmananda Jha (c) and Acting Chief-Justice Damodar Prasad Sharma.