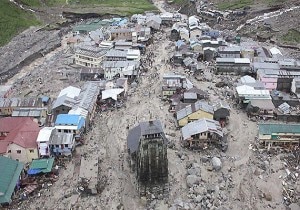 KATHMANDU, Nepal-  A man who was reported missing from Gaurikunda Kedarnath of India in the aftermath of the devastating floods there has returned home four months after the incident.

Baburam BK of Bhalchaur VDC-4. made a surprise call at his house on Friday. The BK family had already performed his last ritual thinking him dead after no news about his condition was received following the disaster.

The neighbours also arranged a marriage ceremony for BK and his spouse Nokhi BK at the local Shiva Temple as per the belief that the person whose death rituals have already been performed has to be remarried if that person comes home, according to RSS.

BK’s family, relatives and neighbours who were jubilated to see him alive gave him a fitting welcome. He was taken home accompanied by music.

BK said he only learned that he had been rescued by the Indian army when he gained consciousness in hospital. “Seeing many colleagues dead, I thought that I would not live,” quoted local newspaper as his saying. He stayed at the hospital for nearly two months and reached home six days after being discharged from hospital.

The hospital had given him Indian Rs. 2,500 as bus fare. He said he still feels weak due to the wounds in different parts of his body. Dozens of Nepalese have died and hundreds of other have gone missing due to devastating flood in Kedarnath four months ago.