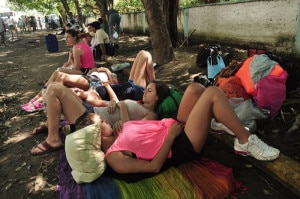 KATHMANDU, Nepal-In this photo made public by AFP on Thursday shows tourists rest while waiting for a chance to board an outbound Mexican Air Force plane at the Pie de La Cuesta military base in Acapulco, state of Guerrero, Mexico, on September 18, 2013 as heavy rains hit the country. Mexican authorities scrambled Tuesday to launch an air lift to evacuate tens of thousands of tourists stranded amid floods in the resort of Acapulco following a pair of deadly storms. The official death toll rose to 47 after the tropical storms, Ingrid and Manuel, swarmed large swaths of the country during a three-day holiday weekend, sparking landslides and causing rivers to overflow in several states.