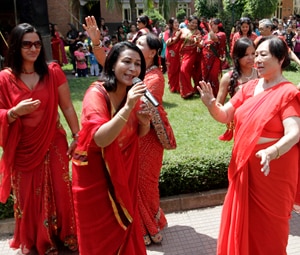 The festival which is also celebrated as ‘Haritalika’ normally falls on the third day of dark half of the lunar month of Bhadra (Nepali calender).

As per the tradition, married women celebrate this festival wishing long life for their husbands and prosperous conjugal life while the unmarried women who worship Lord Shiva and Parvati are also believed to find an eligible groom.

Early from the Sunday morning, women attired in red clothes are offering prayers and worshiping at Pashupatinath Temple in Kathmandu and other temples of Lord Shiva in other parts of the country.

A day before Teej on the night of the second day of the fortnight, women enjoyed a variety of delicious dishes known as ‘Dar’ at their parental home where they were kindly invited.

Traditionally, women put on bangles, ‘Pote’ (a necklace made of glass beads), ‘Tilahari’ and ‘Sindur’ (crimson powder) which are regarded as the the symbols of good luck and clad themselves in red saris and various kinds of golden ornaments.

On this very day, women seem in jubilant dancing and singing in a care-free manner at any places.

According to a religious scripture of the Hindus, this festival got the name ‘Haritalika Teej’ when the daughter of the Himalayas, Parvati, was hidden by her maids because of her refusal to marry Lord Vishnu on this very day as described in the ‘Satya Yug’ (golden epoch of truth).

The government of Nepal has announced a holiday for women on Sunday.