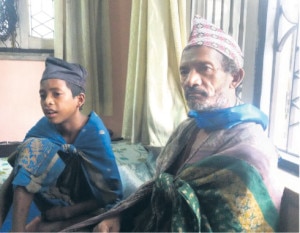 KATHMANDU, Nepal–The four nomadic Rautes who had arrived in the capital five days ago to seek financial support from the government for the Dashain festival have returned empty-handed.

“In a hope that the government would provide financial support to us for celebrating the Dashain festival, our fellow had sent us to the capital l. But the government dashed our hopes. We are forced to return home empty-handed”, Surju Narayan Shahi Thakuri, a Raute leader was quoted by Nagrik daily adding that the prime minister deceived them.

The Raute community is the only nomadic community in the country with a population of no more than 200.

With no financial support from the government, they doubt if they will be able to celebrate the Dashain festival.

According to Surju Narayan, another Raute leader they had assured their people to bring with foods and goats for them but with the government’s apathy they are being devastated. Hoping to raise amount, a group of Raute had made their way to Kathmandu, from Gurbash in Dalilekh district where 40 families of nomadic community live.

The daily further reported quoting another member of the group that they will ask the government to provide them financial assistance aid through local bodies like District Administration Office and Village Development Committee.

Missing their jungle life the nomadic community had reportedly been complaining of headaches and dizziness. “We were also missing our family and our jungle life,” they told.