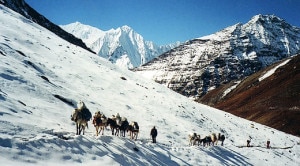 KATHMANDU, Nepal–The budget for fiscal year 2014/15 has taken the policy of promoting Nepal as an attractive and safe tourism destination in the world.

Unveiling the budget, Finance Minister Dr Ram Sharan Mahat said the government would promote Great Himalaya Trail that spans from Taplejung in the east to Darchula in the west.

It goes though base camps of almost all tallest peaks in the country.

Similarly, the government has allocated Rs 7.08 billion for the construction and upgrade of various airports across the country. It plans to install necessary equipment in Janakpur, Bhadrapur and Surkhet airports so that they support take off and landing of flights during night time.

The government has unveiled plan to acquire 22 new aircraft (15 for domestic and 7 for international operation) within the next five years aiming to strengthen the national flag carrier Nepal Airlines Corporation. Similarly, the government has decided to waive off income tax for next 10 years for tourism entrepreneurs constructing resorts on the banks of Rara and other major lakes across the country.