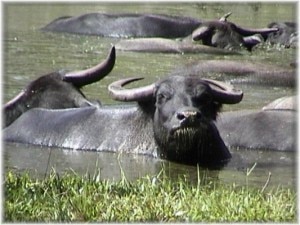 KATHMANDU, Nepal–After realizing a possible threat to the wild buffaloes through cross breeding, the Koshi Tappu Wildlife Reserve has decided to gun down stray buffaloes left in the park.

The stray buffaloes belong to locals living adjoining the reserve area and mainly of Indian nationals living across the border.  Conservation officials said they were forced to adopt an unpleasant measure as all the other techniques failed.  “We were compelled to resort to such measure after all other attempts failed,” Ganga Ram Singh, a conservation officer of the reserve was quoted by ekantipur.

Following Reserve’s decision, as many as 700 buffaloes have been drawn out from the reserve by their owners so far. Though the reserve has been posting notices each year, it has had little impact on people especially those from across the bordering towns of Supol, Arariya and Purnima in India.

Locals claimed around 95 percent of stray buffaloes in the reserve belong to Indian nationals. They have further blamed the government officials of not adopting strict measures. Some opine that the herds that wander inside the reserve were in fact not wild buffaloes, rather the herds, comprised mostly of stray buffaloes.

“We are fined if our buffaloes enter the reserve while those leaving their animals there for years have not been charged until today ‘, local Bechan Chaudhary of Tapeshwori complained.

The reserve spread across 175 square kilometres was set up in 1975 to conserve wild buffaloes. The wild buffaloes are much darker and have white hair in the knees, and consider being stronger and cleverer than the average domestic ones.

The reserve houses 327 wild buffaloes including 52 adult males and 98 females while the number of stray buffaloes exceeded 10,000, according to the latest census.