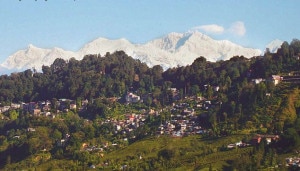 KATHMANDU, Nepal– Nepal, India and Bhutan have agreed on a plan to jointly conserve Kangchenjunga landscape in the Hindu Kush Himalayan region.
The landscape encompasses the southern stretch of landscape surrounding Mt. Kangchenjunga (8,586m), which spreads over diverse ecological zones in eastern Nepal, Darjeeling and Sikkim in India, and western Bhutan.
The new “globally important” Kangchenjunga landscape plan is designed to explore and develop livelihood issues of people living in the region and to improve the ecosystem, according to the Ministry of Environment, Science and Technology.
The landscape is one of seven key trans-boundary areas identified by the International Centre for Integrated Mountain Development (ICIMOD), a regional learning centre for the eight Hindu Kush Himalayan countries – Nepal, Bangladesh, Bhutan, China, India, Nepal, Myanmar, Pakistan and Afghanistan.
Of the 22,000 sq km covered by the plan, Nepal has 3,700 sq km while
India and Bhutan have 14,000sq km and 4,600 sq km, respectively.
Being one of the seven landscapes shared by Nepal, India and Bhutan, the Kangchenjunga region is considered one of the world’s most significant areas for biodiversity.
The landscape is also home to over 100 species of mammals, 550 birds and 600 butterflies. It is inhabited by “umbrella species” like snow leopard, red panda, Takin, blue sheep, Serow, Himalayan musk deer, Himalayan Tahr, tiger and Asian elephant.
The landscape has a network of about 20 protected areas, eight of which are shared by two or more countries.
The International Centre for Integrated Mountain Development, with support from the MacArthur Foundation, has been implementing the landscape approach to biodiversity conservation through the development of conservation corridors among protected areas in the Kangchenjunga Landscape.