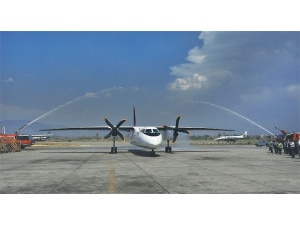 KATHMANDU, Nepal- A 28-year long wait for the state owned corporation Nepal Airlines Corporation to expand new aircraft to its fleet ended as the Chinese-made MA60 plane landed amid great fanfare at the Tribhuvan International Airport (TIA), Sunday. The 58-seater Modern Ark (MA) 60 aircraft landed at TIA in Kathmandu on Sunday afternoon. NAC had last added its fleet in 1987 when it brought two Boeing 757s. China Aviation Industry Corporation (CAIC) provided the aircraft to NAC on grant. The aircraft is a part of loan and grant agreement worth Rs 6.67 billion for the getting procession of six aircraft — four 19-seater Harbin Y-12e and two two MA 60s. NAC had signed an agreement with the Chinese government for aircraft procurement last year. According to officials at TIA it will take few weeks for NAC to bring the aircraft into commercial operation as it is yet to get Air Operator Certificate (AOC) from Civil Aviation Authority of Nepal (CAAN), the aviation sector regulator.