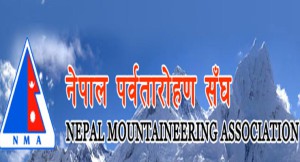 KATHMANDU, Nepal-: Nepal Mountaineering Association has drawn Prime Minister Sushil Koirala’s attention towards issues of safety and social security of climbers and mountaineering support staff after the worst ever disaster on Mount Everest.

An NMA delegation lead by its president Ang Tshering Sherpa handed over a memorandum to the PM at his official residence in Baluwatar on Saturday afternoon asking him to mobilise government mechanisms to support adventure tourism in the country, according to NMA.

The delegation briefed the PM about the latest development in the mountaineering sector after the avalanche in the Khumbu Icefall region. On the occasion, the delegation asked the government support to set up climbers’ welfare fund, social and economic uplift of mountaineers, and promotion of mountains among other issues.