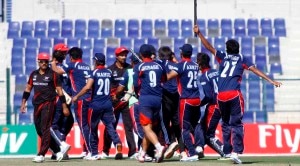 KATHMANDU, Nepal-Thursday was certainly a day of great national pride for all the Nepali cricket players and their fans residing across the world as Nepal qualified for ICC T20 World Cup 2014 to be held in Bangladesh after beating Hong Kong in a dramatic manner.

Having taken part in U19 World Cup over several times, this is the first time the Nepali cricket team achieved in the history.

Nepal performed in International Cricket in 1996 as an associate member, and after 17 years its World Cup dream came true

Nepal was made to wait until the last ball of their innings to knock off a 144-run target set by Hong Kong.

‘I think this is the huge achievement and greatest moment of our lives. Ever since we started playing cricket it was a dream to play World Cup. We have worked so hard for this moment.’ Paras Khadka, team captain of Nepal cricket team said adding, ‘I am so happy that I cannot even express in words.’

Social networks sites like Facebook and twitter were filled with words of compliments and congratulations both to Nepali team and Nepal for its historic achievement in the sports.

‘Eventually you did it! Made us pride in the glove! Materialized our dream within short frame of period! Let’s political leaders get lessen from the cricket team!’ Jasmine Tiwari posted on her Facebook wall.

All the peoples from various walks of life have behind the victorious Nepali team, with Chairman of Interim Election Government Khil Raj Regmi has offered his words of compliments to the team’s qualification to the Twenty20 World Cup.

‘I am extremely glad with the historic success. The victory has not only brought about great exuberance among cricket fans but also helped raise national pride around the globe,’ said Regmi in a statement.

National Sports Council has proposed to the government of Nepal to recognize the cricketers with cash prize of 1 million for each player after the historical success.