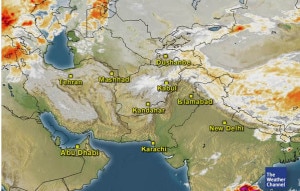 KATHMANDU, Nepal-The Meteorological Forecasting Division (MFD) has announced the end of monsoon in Nepal for this year, from Sunday noon.

“This year’s monsoon has completely ended from the country as of today. The existing weather in the country is associated with western disturbance,” MFD said, issuing a special weather bulletin.

Monsoon in Nepal usually begins mid-June and ends by mid-September. However, this year, Nepal witnessed the longest monsoon in four decades, lasting for 125 days.

The clear sky ahead of Dashain festival turned dark and grey due to the impact of Cyclone Phailin that started from the Bay of Bengal in India.

However, the Division has warned that there is possibility of brief rainstorms in few regions but the weather will improve completely in next few days.

Nepal had experienced an unexpected and continuous rainfall for four consecutive days due to the Cyclone Phalin dubbed as ‘Himalayan Tsunami’ in the Bay of Bengal.

The minimum temperature of Kathmandu had dropped down to 15 degree celsius during Dashain.

Likewise, normal life in Solukhumbu district was hit hard following the heavy snowfall triggered by incessant rainfall for a week.