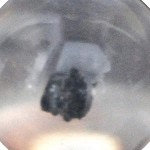 KATHMANDU, Nepal-A rock taken from the Moon is going to be put on display in Kathmandu from Thursday.

The stone weighing 20 grams is supposed to be billions of years old. Chairman of the Everest Science Centre at Amahibelha, Dr. Dilip Adhikari, said that the stone named Meyer Basalt is going to be exhibited at the Birendra International Convention Centre (BICC) at New Baneshwor, Kathmandu.

The rock which was provided to Nepal by US space agency, NASA is being exhibited at the Centre in Sunsari from August 4.