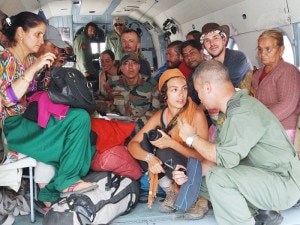 In this handout photograph released by the Indian Ministry of Defence on June 23, 2013, rescued foreign tourists and Indian civilians from the Gangotri area are seen inside the cargo hold of an Indian Air Force Mi-17 transport helicopter at Dharasu in Uttarakhand state on June 22, 2013. Bad weather hampered rescue operations June 23 in rain-ravaged northern India where the death toll from landslides and flash floods was likely to rise up to 1,000 with thousands of pilgrims and tourists still stranded in remote mountains without food or water for days. Source: AFP