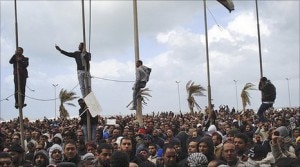 KATHMANDU, Nepal–As many as 300 Nepalis are reportedly in desperate condition in war torn Libya. Though the government banned Libya as a work destination for Nepali workers since 2010 after 108 Nepali migrants were dismissed and later taken hostage by a private company, Nepali migrant workers have not stopped to opt for this land. Many Nepalis continue to travel to the North African country via illegal routes. Nepal´s embassy in Cairo, Egypt, estimates that there are around 500 Nepalis in Libya.
In the meantime, nine Nepali migrant workers are reportedly stranded in various cities in Libya. The stranded workers have urged the embassy in Cairo to rescue them at the earliest through neighboring Tunisia. The Nagrik daily quoting Nepal ambassador to Egypt, who is also designated to look into Libya, said that it is unable to shift them to Tunisia unless they have their return tickets to Nepal. A sum of around 220 dollars is required for moving one person from Libya to Tunisia.