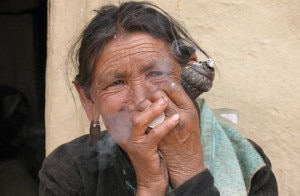 KATHMANDU, Nepal–Uses of tobacco and unhealthy dietary habit have heightened over the years among Nepalis, thanks to the harmful life style that has led to the various kind of diseases: blood pressure, high cholesterol and diabetes among people. One in every two men aged between 15 and 69 has been found consuming tobacco in smoke, a survey carried out by the Nepal Health Research Council (NHRC) revealed.

The survey that was conducted with the support of the Ministry of Health and Population and the World Health Organization (WHO) further disclosed that tobacco use, alcohol consumption, high blood pressure have been found to be more common among men than women in Nepal.

According to the survey, among the 42 percent of deaths in Nepal, 35 per cent are induced by four particular Non Curable Disease (NCDS) i.e. cardiovascular diseases, cancer, chronic obstructive pulmonary disease and diabetes mellitus.

The researchers suggested that giving up alcohol and tobacco use, adopting proper lifestyle, regular physical exercises and a proper diet containing enough fruits and vegetables could prevent people from disease.