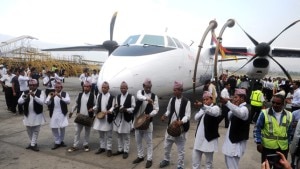 KATHMANDU, Nepal–The new China-made aircraft of Nepal Airlines Corporation (NAC) has been grounded for at least one week; following damage after an eagle hit one of its wings.

The state-owned airline company’s aircraft, MA60, which started its commercial operations from Wednesday morning, collided with an eagle Monday while landing at Biratnagar airport.

Though no passenger was wounded in the collision, a crack was formed in one of the device of the aircraft, according to NAC sources. The carrier will be grounded for at least six to seven days since the corporation has to bring new spare parts from China where it was made.

Birds flying around the airport’s runway and get sucked into the airplane’s engine have become common in the country,

It is said a bird weighing three kilograms can turn into an object as weight as 212 kilogram when it touches  10 square feet area of a carrier flying at a speed of 150 miles per hour.

There were 52 people on board including seven crew members when the newly made plane that came into operation just a week ago met an accident.

The aircraft started making schedule flights after the Commission for the Investigation of Abuse of Authority, an apex constitutional body for corruption control in Nepal issued a June 29 deadline to begin commercial operations.