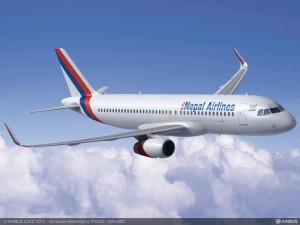 KATHMANDU, Nepal– A Nepal Airlines plane bound for Biratnagar from Kathmandu has been collided with a bird while landing on Monday. The bird strike caused minor damage to its wing.

The plane had taken off TIA for Biratnagar at 8. am this morning. Spokesperson and Corporate Director at Nepal Airlines Corporation (NAC) said the right wing propeller of the MA60 Chinese aircraft was slightly damaged after collision.

All the passengers on board are reportedly safe according to Saroj Kasaju, spokesperson of NAC.

The plane is reportedly grounded for at least one week as it will resume flight only after repair works following importing the equipments from China.

52 passengers along with a team of three member pilot including Chinese pilot Pan kyi and co-pilot P Shrestha were on board when the accident took place.