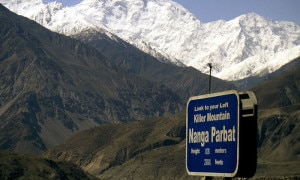 KATHMANDU, Nepal–Pakistan government has offered 1 million rupees compensation to the kin of Nepali mountaineer who was slain by a terrorist while he was accompanying a team of climbers, who were taking rest at the base camp of Naga Parbat, the 9th highest peak (8129 meter) of the world, last year. Nazar Hussain, Charge d´affaires at Pakistani embassy in Kathmandu handed over the compensation amount to victim family at Ministry of Foreign Affairs (MoFA) in the capital on Monday. Doma Sherpa, the widow of slain mountaineer Sona Sherpa, received the amount in the presence of officials at the Ministry. An armed outfit affiliated to Pakistani Taliban had killed 10 foreigners including Sona on June 22, 2013. After robbing the mountaineers, at around 10 PM, the armed group fired indiscriminately at them killing 5 Ukrainians, 3 Chinese, a Russian and a Nepali national. Slain Sherpa was originally from Chheskam VDC in Solukhumbu district.