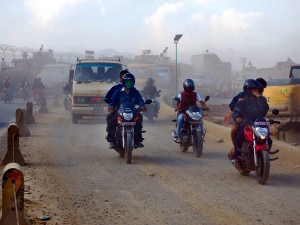 KATHMANDU, Nepal–With an aim to improve  environment of the Capital Kathmandu, the government has brought into effect the Vehicle Pollution Standard-2013 and the National Standard on Air Quality-2013.

At a time environmentalists were worrying over the degrading environment and its negative impact on historical and cultural sites in the Kathmandu valley, the Ministry of Environment, Science and Technology (MoEST) announced to impose the standards.

During a programme in Kathmandu, the Ministry informed it will form an implementation facilitation panel under the leadership of MoEST Joint-Secretary on the broader involvement of all stakeholders for the effective enforcement of the standards.

As per the standard, a four-wheeler vehicular equivalent to the Euro 3 will only be operated.

As per the stats of the Department of Transport Management, there are around 1.37 million registered vehicles in Nepal and the number is being increased by 20 per cent every year and all these vehicles belong to Euro 1 and 2.

Due to the government’s road widening drive, the pollution in the valley is being increased day by day. Valley dwellers have witnessed 60 per cent of pollution just from vehicles and huge numbers of lung cancer patients have been increased due to pollution, according to the officials at the Ministry.

World Health Organization (WHO) in 2005 AD enlisted the Kathmandu Valley as a city with air pollution.