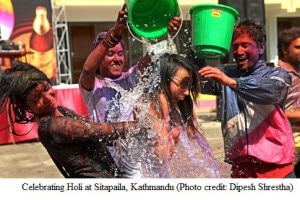 KATHMANDU, Nepal– With an aim to maintain law and order during upcoming Holi festival, the Ministry of Home Affairs (MoHA) is all set to come down hard on the miscreants.

It has directed concerned agencies under the Ministry to take stern action against those who “misuse” the Holi festival that falls on Sunday by making unwanted use of colours and troubling pedestrians by throwing water balloons at them.

The Metropolitan Police Commissioner’s Office (MPCO) plans to tighten up security during the Holi.

Police said it will lodge e a public offense case against those who hurl water-filled balloons at the people or smear colors on their faces against their will.

Officials said plain-cloth security personnel will be spread to avert untoward incidents during the Holi.
The government has directed the security personnel to immediately arrest those who are found throwing water-filled balloons and lodge public offense cases against them.

Police said the offender found during the festival will be sentenced to jail for two years in line with the Public Litigation Act.