KATHMANDU, Nepal– Human right activists affiliated to Human Rights Organization of Nepal (HURON) protesting against the government at a hospital in Kathmandu on December 23, 2013, for failing to provide justice to Nanda Prasad Adhikari and Gangamaya Adhikari, who have been staging a fast-unto-death for two months seeking justice. The Adhikari couple from Phujel of Gorkha has sat for hunger strike at the Bir Hospital, asking strong action against the murderer of their son Krishna Prasad Adhikari. Krishna was slain by the cadres of suspected Maoist during the insurgency 2004.  Photo: NMF. 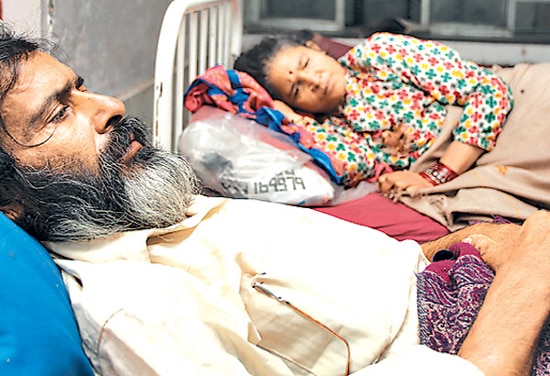 The couple who had broken their 47-day long hunger strike on September 8 has resumed their protest since two weeks after the government failed to book the culprits. File Photo/NMF.