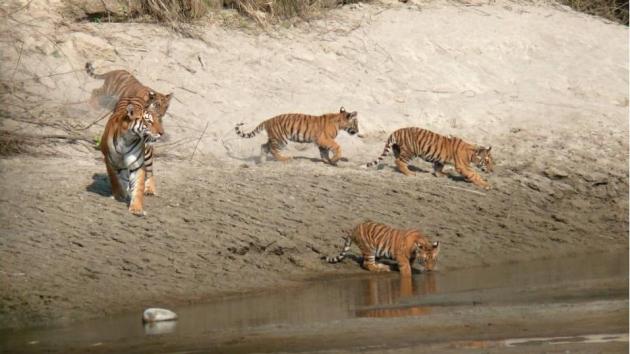 KATHMANDU, Nepal- In this undated photo, tigers enjoying in Bardia National Park, located in south-west Nepal. Nepal is home to a total of 198 tigers, according to the 2013 tiger census report unveiled in July on the occasion of ‘Word Tiger Day’. The census finding showed Chitwan National Park is home to the highest number of tigers at 120 followed by 50 in Bardia National Park. The big cat numbers have now climbed to 198 – a rise of 63 per cent from 2009, when the number was just 121. The population of tiger in Nepal was 126 in 2005, 109 in 2000 and 98 in 1998, National Parks and Wildlife Conservation Department data shows. The five-month survey began in February and assessed the Bengal tiger population across a 600-mile stretch of Nepalese and Indian territory.