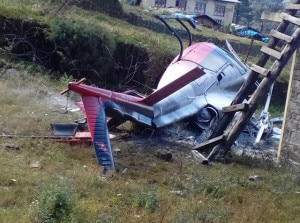 The Lukla bound chopper caught fire after it hit the wire fence of the airport this morning leaving four passengers injured.

The injured Captain of the copterArun Malla and passenger Dawa Gyaljen Sherpa have been brought to the Capital Kathmandu at 10:30 this morning after primary treatment at a local hospital in Lukla.

They were brought to Kathmandu by another copter of the company remaining in the Lukla airport, according to officiating general manager of the  Civil Aviation Authority of Nepal, Narendra Bahadur Thapa. The injured are receiving treatment at Vayodha Hospital in Kathmandu.

There were three passengers—Lhakpa Sonam Sherpa, Anita Sherpa and Dawa Gyaljen  and two crew members in the chopper which flew at 7:28 am this morning  from Lukla to Kathmandu.