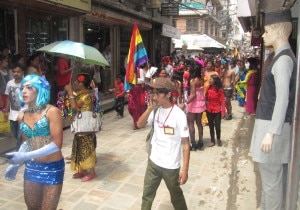 It was the fourth year the rally was held, when LGBT were succeeded to come out in the street without disgrace to mark the day asking rights for their community. Organizers said the march through the capital Kathmandu was an opportunity for LGBT community to educate the public in Kathmandu.

‘I am taking part at the rally to appeal the public so that they stop all kinds of biases against us’,  a participant of the rally Rita Sharma told to Nepal Mountain Focus, ‘Let the general public give up prejudices feelings  against LGBT as we are your brothers and sisters as well .’ The activists were dancing all through the days in the hook and nook of the Capital Kathmandu

Third gender minorities have been deprived from all kind of fundamental rights, according to activist fighting for the right of LGBT.  They have long been complaining that third gender have had difficulty to obtain citizen ship certificates, passports  or enrolling in colleges and schools beside getting opportunity job due to stereotype  concept towards the community.

With decline of century’s long monarchy in Nepal after the election of the Constituent Assembly (CA) in 2008, sexual minorities began to march publicly in the streets asking for their rights.

Kathmandu-based Blue Diamond Society has been campaigning for the right of Nepal’s LGBT community. The groups have asked that the new constitution, which was being written by the assembly before it expired last year, include rights for them.