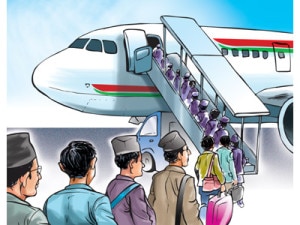 KATHMANDU, Nepal–With an attempt to replace comparatively risky and less-paying jobs in the Gulf countries where scores of Nepali migrant workers are toiling, the government is all set to come up with an action plan that will encourage Nepali worker to go to  Europe and the US as well.

At present only one percent Nepali workers are working in European countries after getting permission from labour department.

The Foreign Employment Promotion Board has already prepared an action plan to send Nepali workers to the developed countries after identifying these regions as for foreign employment.

Multiple sources at the Board said that the process of sending Nepali workers to western countries especially Europe and America has already initiated and an action plan is currently in the final phases of completion.

Sectors that Nepali workers can find work in Europe following a brief training include agriculture, manufacturing, hospitality, plumbing and wiring, according to Board officials.

Though Nepal has approved 109 countries for foreign employment, Nepali workers are currently going to only 25 countries of them with more than 90 percent of Nepali labourers going to Malaysia, Saudi Arabia, Qatar, the UAE and Kuwait.

According to the Board, The highest numbers are in Cyprus, followed by the US, the UK and Germany