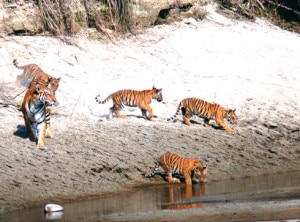 KATHMANDU, Nepal–Tiger´s prey population has increased over the last five years leading the growth in tiger population itself across the country.

The Bardiya National Park (BNP) has the highest number of prey for tigers than any other protected zone in the country, according to a report ´Status of Tiger and Prey in Nepal.´

The BNP, which spreads an area of 968 square kilometers covering three districts in the mid-western lowlands, has a prey density of 92.6 animals per square kilometer – higher than in any other conserved area.

The report was prepared by the Department of National Parks and Wildlife Reserve (DNPWC) in collaboration with the World Wildlife Fund (WWF) Nepal and the National Trust for Nature Conservation (NTNC).

BNP houses as many as 11 prey species, with sighting of 332 chittals (Axis axis). Langurs, sambars, wild boars and barking deer were also spotted in significant numbers.

The CNP, which spread an area of 932 square kilometers, houses as many as 120 tigers.

Officials at the Ministry of Forest and Soil Conservation said that credit to significant increase in the tiger population and prey base density goes to conservation attempts government and non-government organization.