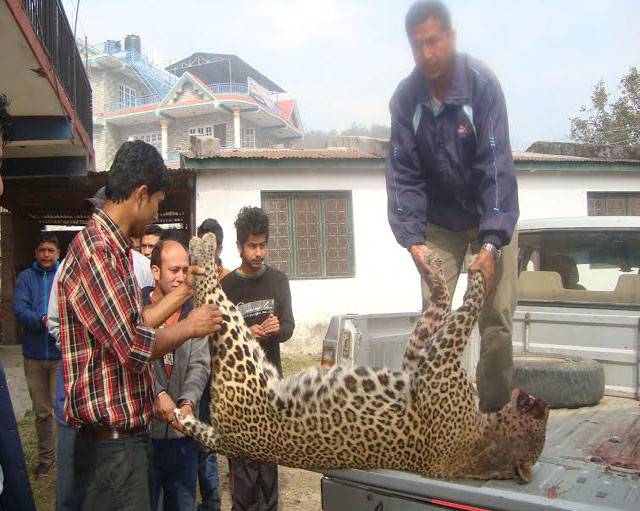 KATHMANDU, Nepal–Locals trying to put the dead leopard in a vehicle at Bhoteodar-9,  Lamjung, nearly 150 km far of the capital Kathmandu on Wednesday, February 26, 2014.

According to a report, the leopard was killed in a retaliatory action as it allegedly attacks cattle of locals. The big cat was sent to District Forest Office (DFO) Lamjung for autopsy.

Animal rights activists in Nepal often condemn brutal killings of wild animals especially leopards, saying these animals’ reaction is inborn and that people need to learn to respect wild lives and their habitats. They have also called for efforts to aware people about wild animals, their behaviour and significance in the entire ecosystem.

Retaliatory action against wild beast has become common incident in the country. Just a year ago, a mob backed by government officials had beaten a leopard with stick to death in Gothatar area of Kathmandu.  Photo courtesy to thehimalayantimes.com