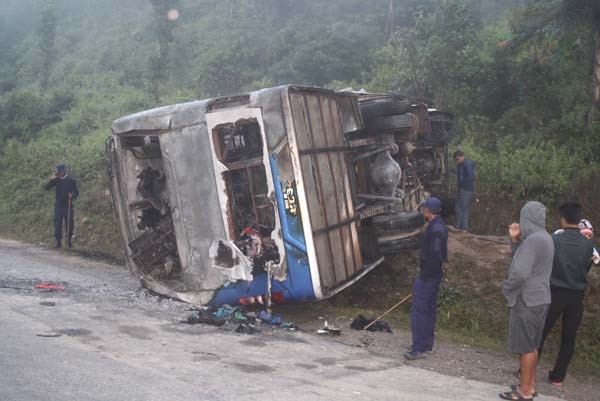 KATHMANDU, Nepal-In this Face Book post image, a passenger bus lying at Basanadi VDC-2 in Makwanpur district along the East West highway, nearly 60 kilometer far of the Capital Kathmandu, after a group of arsonists hurled petrol bombs targeting the bus while it was moving in its destination, Thursday night leaving at least a dozen passenger injured.

According to eyewitness, the bus overturned as soon as after a group of three men who were hiding along the roadside hurled two petrol bombs at the driver. Among the injured, driver, assistant driver and a passenger have reportedly been sustained serious injuries while the bus has been completely damaged in the incident.

Vehicles plying across the long haul route have remained off the road in the Highways across the nation due to vehicles’ strikes called by 33 fringe political parties’ anti-polls alliance led Baidhya led Maoist, aiming to disrupt the November 19 polls, though the Capital Kathmandu has no effect of the strikes.