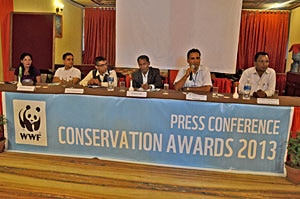 The awardees included five individuals and one organisation that had made exemplary contributions to biodiversity conservation in Nepal.

Under the Abraham Conservation Awards, Sundari Community Forest Users Group from Amarapuri in Nawalparasi was provided the award under the organization category while Dr. Indra Prasad Sapkota, Planning Officer at the Ministry of Forests and Soil Conservation, and Prakash BK, a social mobilizer, were provided awards under the individual category.

“While I am honored to receive this award, I must mention that all my efforts in conservation would be incomplete without the support of the local communities who have shown tremendous commitment towards protecting Nepal’s rich biodiversity,” stated Dr. Indra Prasad Sapkota, one of the awardees of the Abraham Conservation Awards.

The Conservation Awards are offered to organizations and individuals to honor their outstanding feats in the field of conservation in areas such as natural resource management, biodiversity protection, social mobilizationand journalism. The award holds a citation and cash prize of NRs. 25,000 for individuals and NRs. 50,000 for organisations.

In the meantime, a  monument constructed in memory of the conservationists, who died in a helicopter crash in Taplejung on September 23, 2006, will be inaugurated on Monday.

The monument build at Vinthuna hill is a joint effort of Environment Conservation and Development Forum, the Taplejung District Development Committee and the Great Himalayan Trail Development Program.