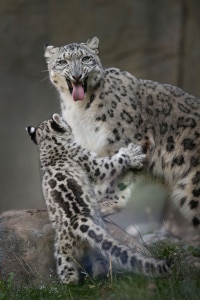 KATHMANDU, Nepal- three-month-old snow leopard cub plays with his mother during his public debut at the Brookfield Zoo on September 18, 2013 in Brookfield, Illinois. The cub was born on June 13 to his mother Sarani who is on breeding loan from Tautphaus Park Zoo in Idaho Falls Idaho and her mate Sabu who is on breeding loan from Cape May county Park Zoo in New Jersey. There are an estimated 3,500 to 7,000 of the endangered leopards remaining in the wild.   Photo courtesy to AFP