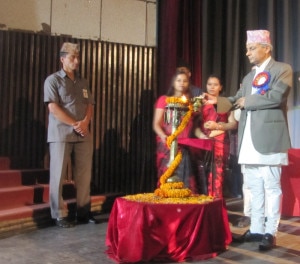 KATHMANDU, Nepal-Chairman of Council of Minister Khila Raj Regmi inaugurates the first National Science Day on Tuesday September 17, 2013 in Capital Kathmandu. Aiming to focus national attention on the advancement of science and the scientists of Nepal, given their increasing importance and role in the country, the Day is being celebrated with the slogan ‘Science and Technology, National Prosperity.’

The two day event is organized by the Ministry of Science Technology and Environment in coordination with Nepal Academy of Science and Technology (NAST).

Commemorating the establishment day of Amrit Science Campus (Ascol), the government decided to mark the first ever Science Day in the country. Ascol, located at Lainchaur in Kathmandu is the first public science campus in the country. Science Fair is also being organized on September 17 and 18 at Nepal Academy on the occasion. Photo: Nepal Mountain Focus. 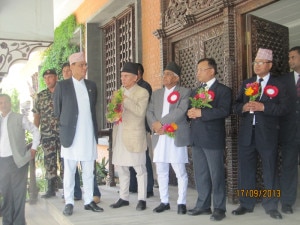 Minister for Science, Technology and Environment Uma Kant Jha (left), vice chancellor of Nepal Academy of Science and Technology (NAST) Dr. Surendra Raj Kafle, NAST’s staffs among other dignitaries waiting for the arrival of Chairman of Council of Minister Khila Raj Regmi at Nepal Academy for the programme.