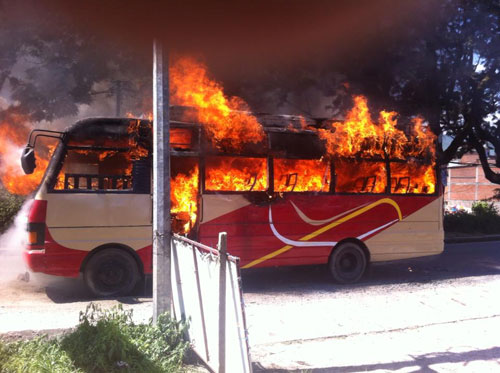 KATHMANDU, Nepal- Bus on Fire! A passenger bus set ablaze by the cadres of CPN-Maoist in Kavre for defying the bandh- shutdown strike- called by the party on Sunday, September 15, 2013. The bus, with registration number- Ba 2 Kha 5672- that was en route to Melamchi from the Capital Kathmandu, was torched by the cadres at Dhulikhel this morning. Television reports quoting the police said no passengers were hurt in the incident as the bandh enforcers get all the passengers out from the bus before setting it on fire. Reports say that the bandh enforcers have also attacked local journalist for traveling on a motorcycle during the banda. Tha party has also called for Kathmandu valley bandh on Thursday.  Photo: Courtesy to Deepak Thapa/ekantipur