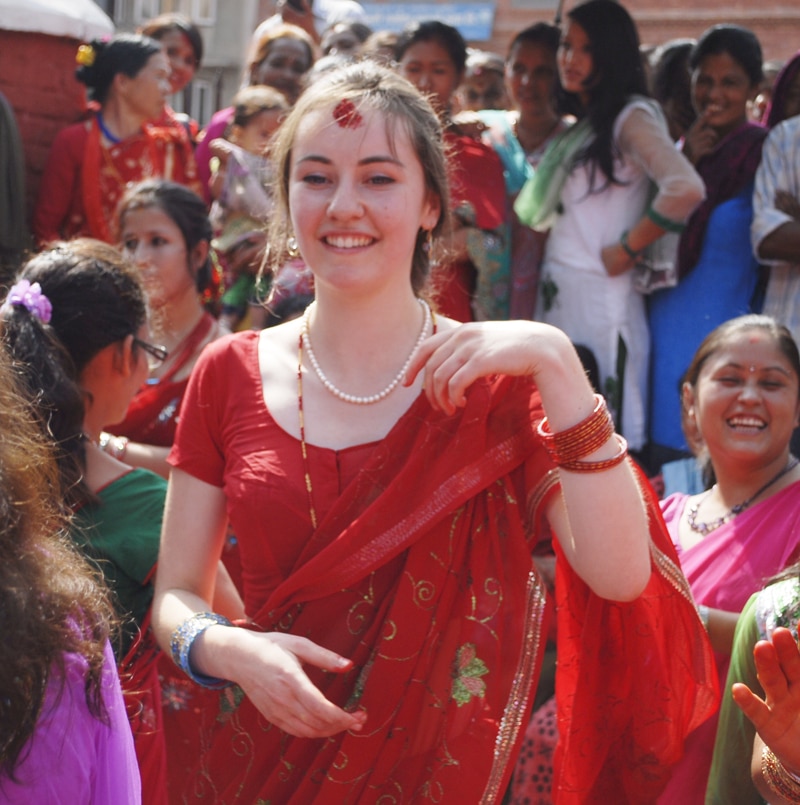 KATHMANDU, Nepal- Siyana Carvor of London attired in red sari and red blouse dances during Haritalika Teej Festival at the premise of Kumbheshor temple in the Capital on Sunday, September 8, 2013. 20 years old Carvor marked Teej by fasting, singing, dancing and worshipping the Lord Shiva like other Hindu women in Nepal.

Also a student of Cambridge University, Carvor arrived Nepal a week ago for 15 days. This is her second trip to Nepal. As an unmarried woman, she fasted on Sunday sans drinking water in the belief of the prosperity and longevity of her would-be husband. Many tourists were seen in the temples trying to match the footsteps of dancing devotees like Carvor. Photo: Nepal Mountain Focus.

Other Teej photos by AFP:[nggallery id=746]Nepalese Hindu women dance after paying homage to Shiva, the Hindu god of destruction, as they celebrate the Teej festival at the Pashupatinath temple area in Kathmandu on September 8, 2013. The three-day long Teej festival, celebrated by Hindu women in Nepal and some parts of India, is observed with married women fasting during the day and praying for long lives for their husbands, while unmarried women wish for handsome husbands and happy conjugal lives. AFP PHOTO/Prakash MATHEMA